Sodium Polytungsteate (SPT) is the generic name for the compound here involved: The specific compound involved is sodium metatungstate Na6(H2W12O40), which is a spherical molecule having 40 oxygen atoms on its outer shell, 12 tungsten atoms in tetrahedal configurations in an inner shell and 2 hydrogen atoms in the center, all surrounded by 6 sodium cations. 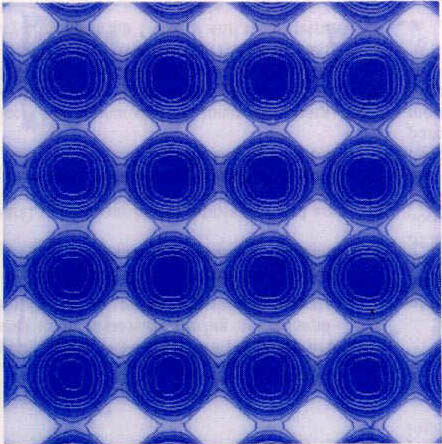 Computer enhanced 10 million enlargement of 16 polytungstate anions (H2W12O40). Actual size is 1 nm or 10 A diameter of the individual spherical molecule.

The analytical data is:

Sodium Polytungstate contain only a very low concentration of Carbon and has a low viscosity at high concentration. The solution of the white crystalline powder has a adjustable density from 1.0 to 3.1 g/ml. Ph-scale is approximate 3 at 4000 g/l water by 20°C. Note that SPT solution is stable in the pH-range 2-14. Please see Material Safety Data Sheet for further information.

The compound also has a tendency to supersaturation, a property which is of importance when density measurments are carried out with highly concentrated polytungstate solutions (important for the separation of minerals of differing densities).

The agent can have a density of up to 3.1 g/ml and has a low viscosity at high concentrations. The viscosity increases only insignificantly up to a density of about 2.5 g/ml. Accordingly also separations in the fine grain range are possible within shorter periods.

In the case of separation of water-insoluble solid mixtures of different densities, the densities of the solutions of the polytungstate can be increased up to 4.6 g/ml by adding to the solutions high density materials such as tungsten carbide of suitable grain size so as to form a suspension.

NOTE: The trace elements can be removed quantitatively from the separated goods by a few washings with water.

Depending on concentration of sodium polytungstate the pH range is between 2 and 3.

The density of aqueous sodium polytungstate solution as a function of the mass portion at 77°F 25°C. 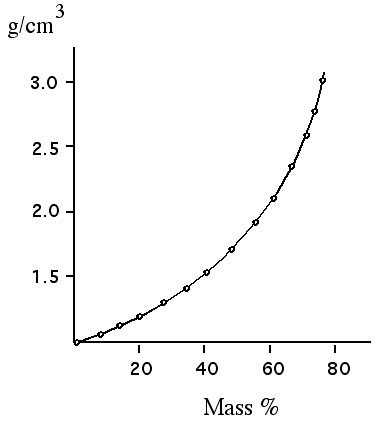 The viscosity of aqueous sodium polytungstate solution as a function of density portion at 77°F (25°C). 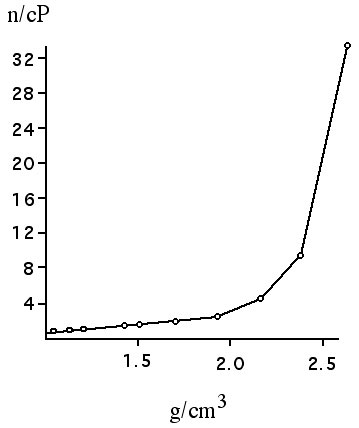